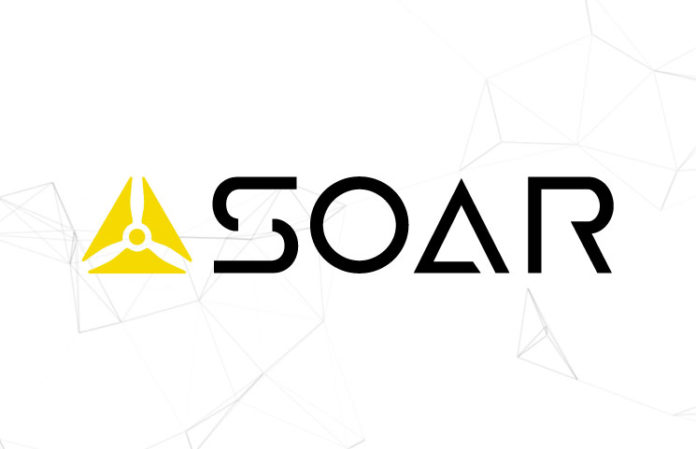 A brief summary of the project

Soar is a decentralized global super-map of the world built on blockchain technology. The super-map will include access to all mapping systems including daily satellite imagery feeds, through to high-resolution aerial sensors from planes and drone content collected by the community. All connected using blockchain technology to share dynamic mapping data.

Soar has already launched their Beta on the Rinkeby Test Network powered by Ethereum. The beta demo shows the functionality of the platform like uploading and downloading high-quality drone pictures of selected areas. Users can also access up-to-date and historical 10m resolution satellite imagery from the European Space Agency’s Sentinel satellites for any location in the world. Users can also choose specialty satellite imagery types for applications such as forestry, agriculture and environmental analysis. Currently, all the imagery on the Soar beta is free to download while it is in demo mode.

According to their Roadmap, Soar plans for the official Main Net release of the Soar platform in February 2019 which will include an expanded scope of satellite imagery and allow uploading and downloading of high-resolution drone, aerial and satellite images.

In a novel approach, Soar plans to release its SkyStaking system in May 2019. The SkyStaking system will use a specialized security token, separate from the SKYM utility token, to allow users to stake a claim on locations around the world. Stakeholders share in the revenue generated from content in locations where they have a stake.

The SkyStaking model will allow users to receive a share in the revenue generated in their staked areas which are shared amongst the content creator, Soar and the stakeholder(s) as shown below. Unlike dividends, the stakes will be paid at the time of the transaction due to the smart contract. 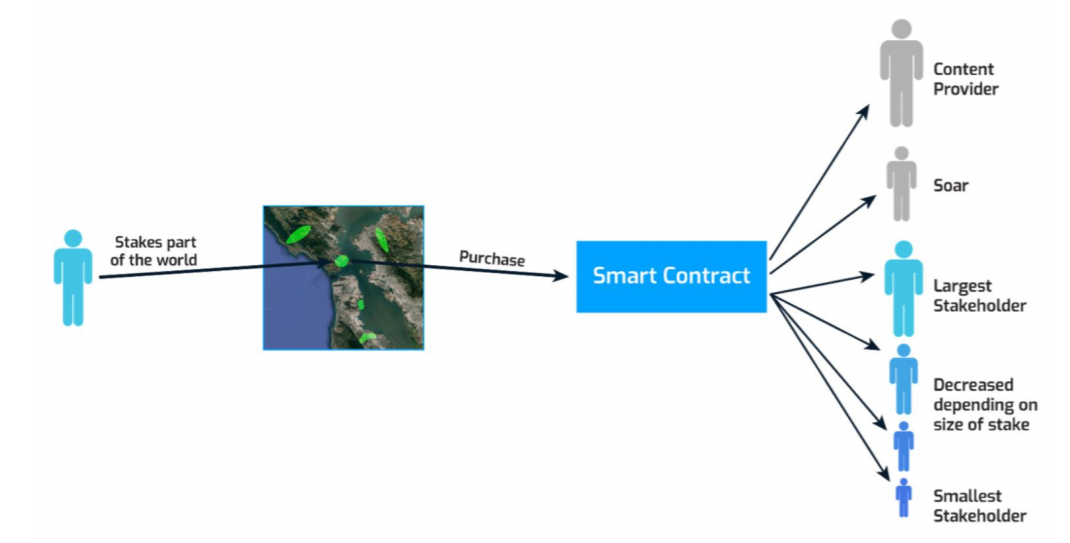 Soar has released a technical whitepaper on the SkyStaking system which is available on their website.

Further down the track, in September 2019 Soar Plans to release its mapping app store which will encourage experts to upload specific image analysis algorithms, including those that use AI and computer vision. These algorithms will let users process data from the Soar in the cloud relating to niche applications such as farming, mining, insurance, urban planning, security and even media and news. 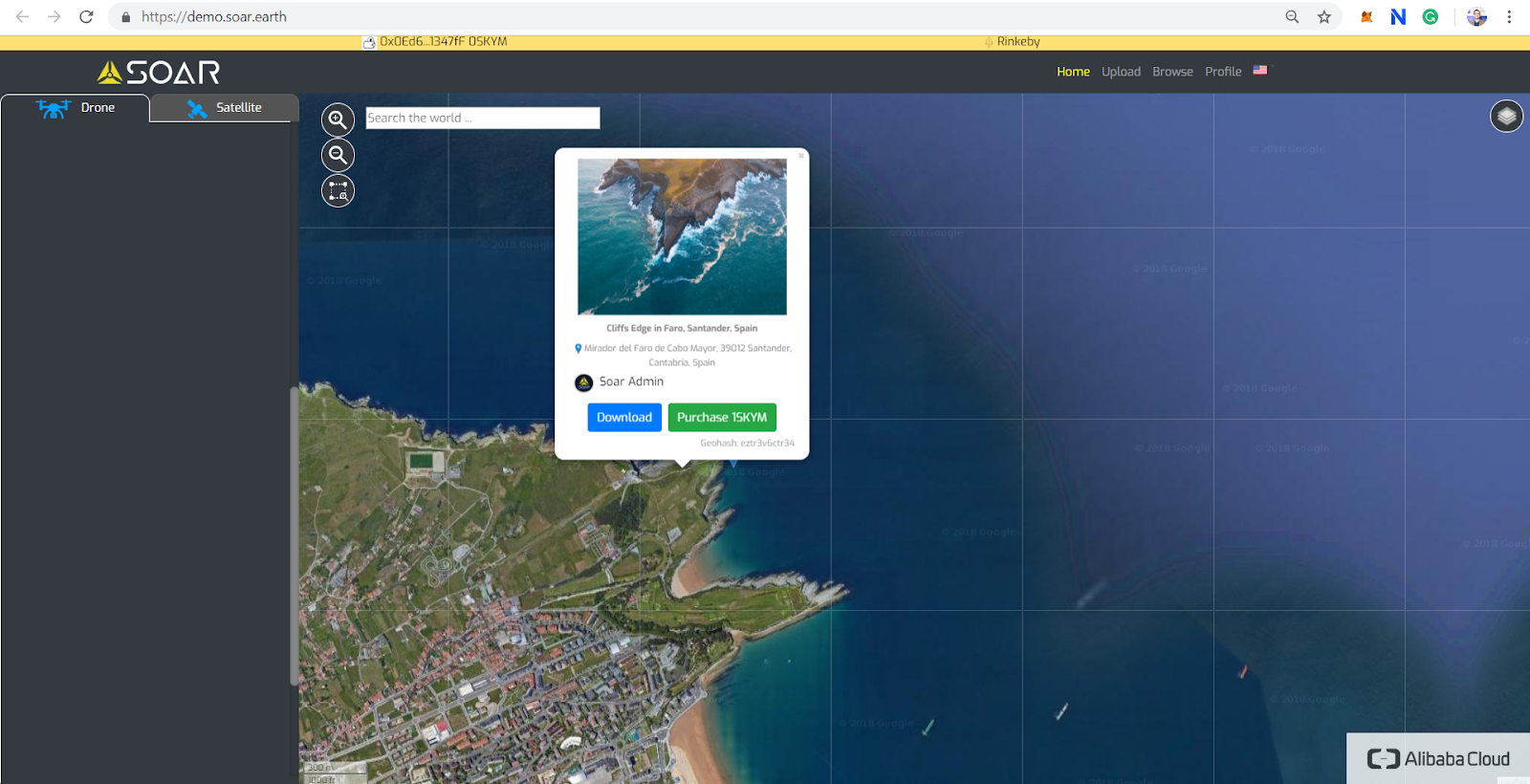 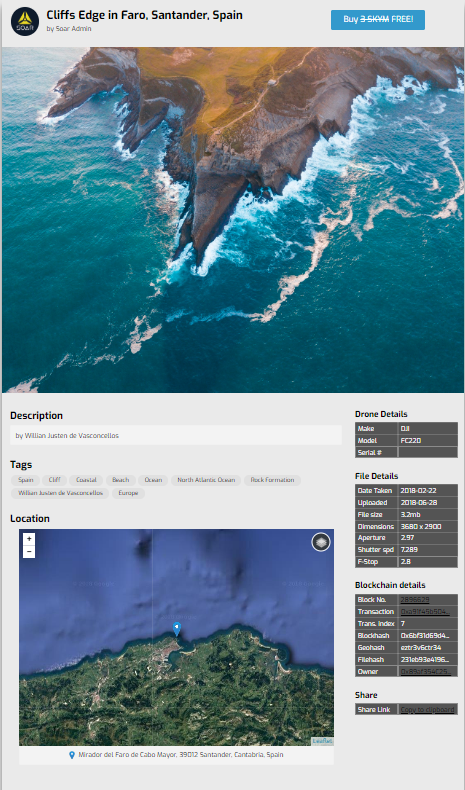 Soar has a utility token SKYM (ERC20) which is used to purchase a content on the platform and receive fees from content sales.

Also, the SKYM token has a supporting usage in the SkySponsor and SkyBounty models. As a reward for sponsoring content, SkySponsors share a portion of the revenue generated for a specific piece of content. SkySponsors will have to hold a minimum amount of SKYM tokens and be vetted by Soar. SkyBounty is a managed matchmaking system for users to pay drone operators to create new content is a specific area.

The SKYM token will also allow users to do cloud processing of images once its mapping app store is launched in 2019.

With the introduction of the SkyStaking system in mid-2019, Soar will be introducing a separate token solely for use in this. The details of the new token, provisionally named SkyStaking token (SKYS) has not yet been released. 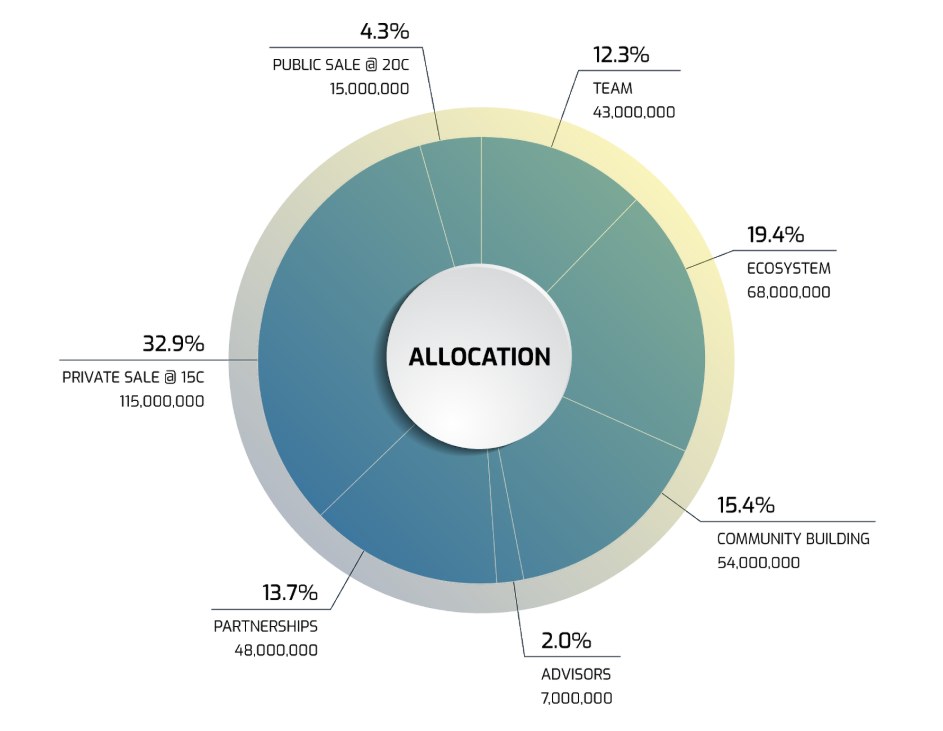 IMPORTANT: Purchasing tokens on Pre-sale stage gave institutional investors access to any additional security events within the next 10-12 months which may include security tokens (i.e. the SkyStaking model), the acquisition of Soar by a 3rd party or possibly an IPO.

Soar has a solid and experienced team. Most of the team are from "parent" company Takor Group, which is specialized in geospatial technology. Founded in 2009 by Amir Farhand (CEO Soar), the company initially focused on using satellite imagery for iron ore and gold exploration, then in 2011 initiated research and development into offline mobile mapping technologies which went onto to be inducted by the United States Department of Defense. Takor's products are used in such industries: agriculture, education, mining, defense etc.

Guy Perkins (Non-Executive Director at Soar) has experience in top management and geospatial technology. He is a co-founder of  NearMap, valued at $600M, and Spookfish, that was recently acquired for $136M by EagleView (source).

Neil Prentice (Partnerships & Commercialisation Manager) has over 25 years’ experience in working with companies in R&D and technology commercialization and marketing.

Chris Lowe (Lead Blockchain Scientist) has extensive development experience in geospatial, mobile and web application development with Takor Group and is now leading the development of the Soar platform.

Dan Anderson (UX & Design) has over 20 experience as a graphic designer and is also a qualified and licensed commercial drone pilot.

Col. James Rhetta (Principal Technical Advisor at Soar) has great experience in developing and geospatial mapping (aerial, drone and satellite systems). He was working for over 25 years at the US Air Force.

Nizam Ismail (Legal Advisor) A regarded thought leader in the field of blockchain compliance, Nizam previously served as Deputy Director at the Monetary Authority of Singapore, as well as the Head of Compliance for Southeast Asia at Lehman Brothers and Morgan Stanley.

Soar has other advisors with experience in a variety of industries including the military sector, agriculture, finance and many more.

Moreover, Soar has partnered with Krypital, which will guarantee them great marketing support, as we saw with Merculet and Egretia recently. 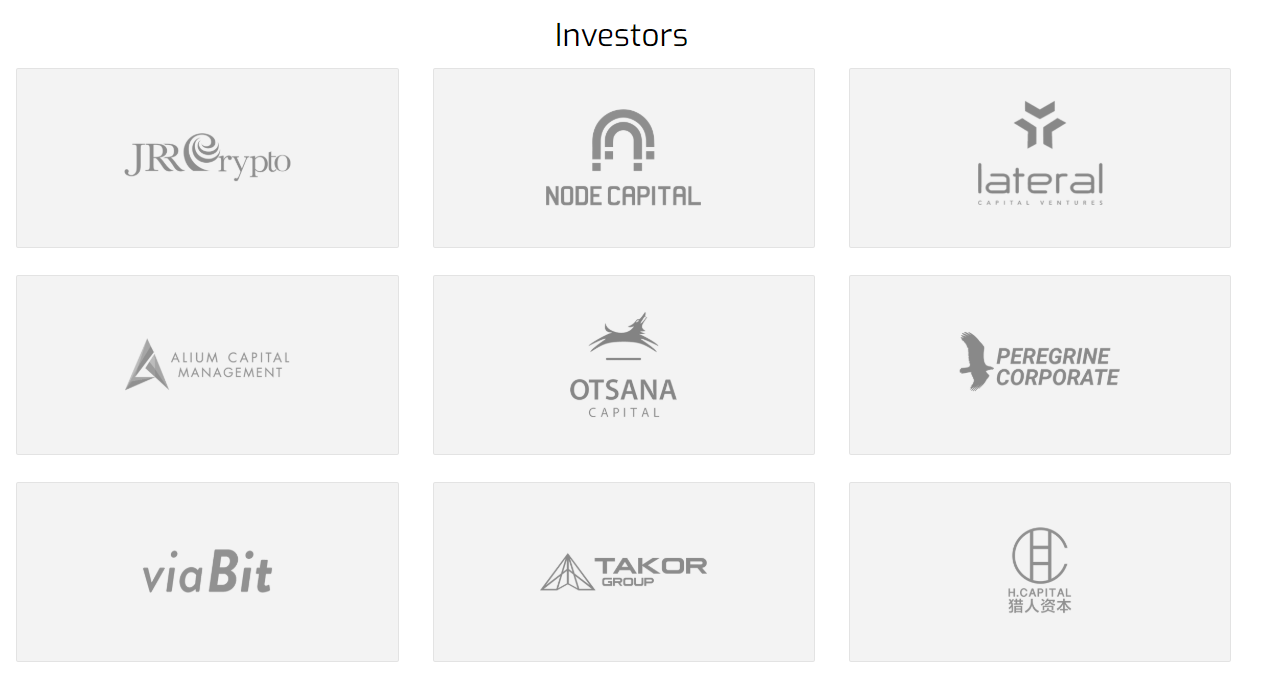 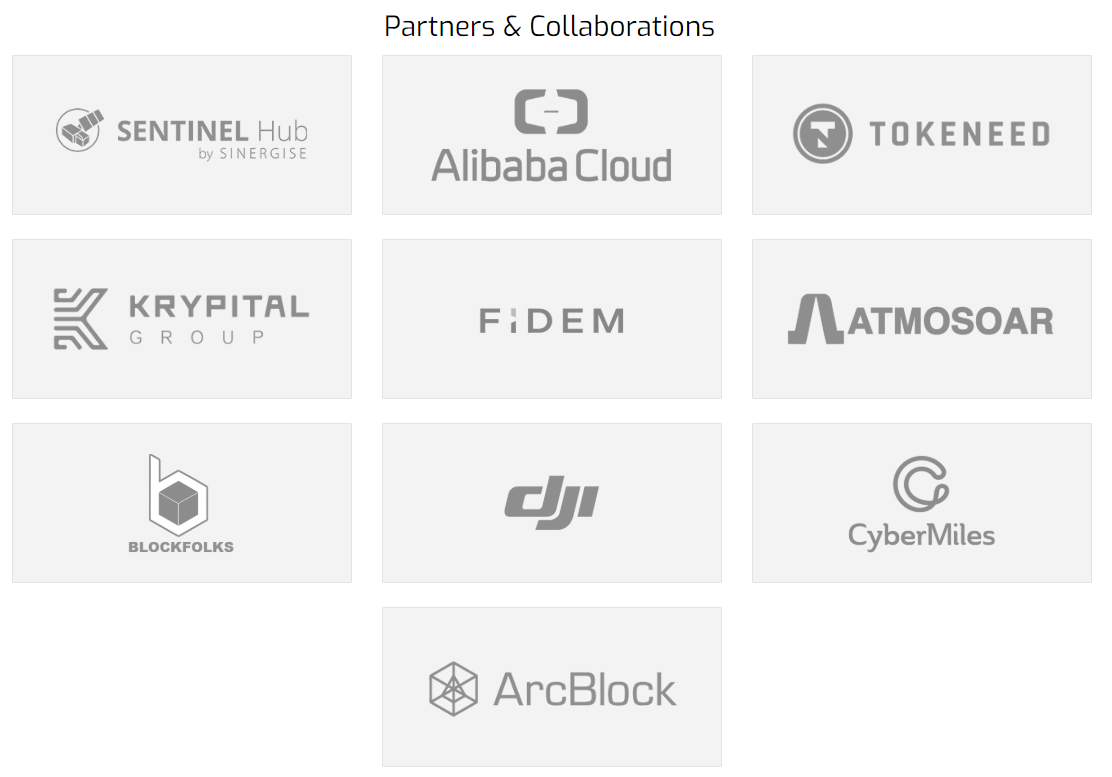 In case Soar does not have direct competitors in the blockchain industry it is hard to talk about its investment potential in terms of peer analysis. The team is solid and experienced in relevant fields. Soar has already raised $17,250,000 in private sale and has just $3,000,000 for crowd sale. Extensive lock-up terms are looking reasonable and will prevent token from the immediate dump.

The idea is ambitious and we believe that the team with such experience can bring it to life.

Soar has already working MVP (600+ drone operators have signed up for launch) and plans to release a working platform in the near future.

Importantly, Soar has the potential to conduct an IPO or create security tokens that will give investors real opportunities beyond speculation on utility token prices.

I love Soar and their vision of the product