MultiVAC ICO: High-Throughput blockchain with the flexibility you need

Is this following Zilliqa’s path in the Korean market?

There are two projects coming in the open recently. I am sure a lot of investors have noticed, but those two are MultiVAC and Chromaway. Naturally it was in my interest to have a look at the two, and I decided to have a look at MultiVAC first (meaning Chromaway is the next article to come up). Why I chose MultiVAC? Well the project is frequently compared to Zilliqa and Quarkchain, and if that is so it is definitely worth having a look. I guess the question is: Can it become the next Zilliqa/Quarkchain? or can it even surpass those two? Let’s find out.

MultiVAC is the next generation high performance public blockchain for industrial dApp implementation. It provides unlimited and sustainable scalability based on its sharding technique and probability model. MultiVAC is the first to propose a Sharding model based on Verifiable Random Functions (VRF) for transactions and storage. I will get to VRF in the next paragraph. Miners are selected by MultiVAC’s probability model, and the transactions are confirmed through the UTXO model. Overall, MultiVAC provides the infrastructure for industrial dApp with high security and reliability + fewer nodes for higher TPS. 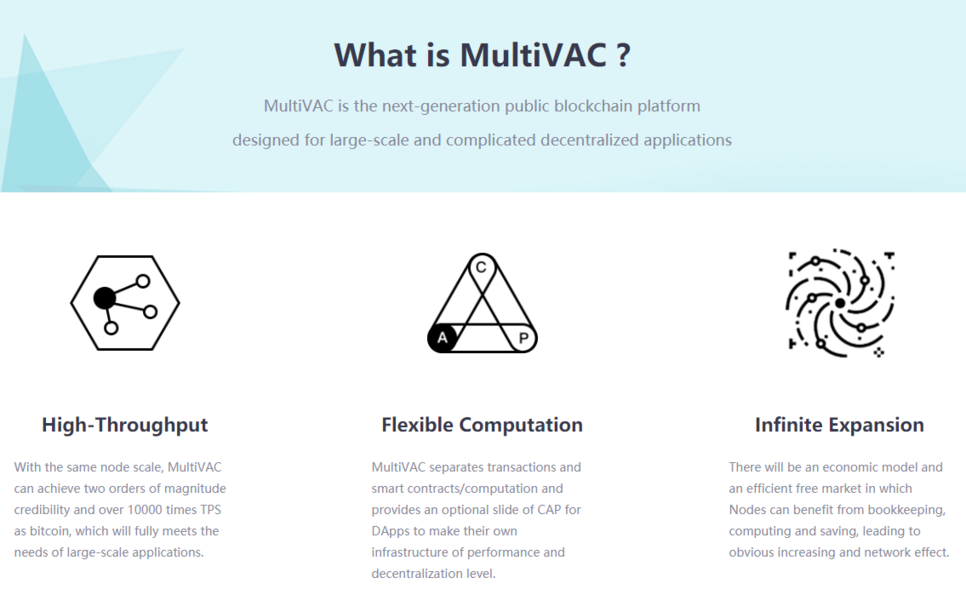 A quick look into VRF

VRF seems to be an interesting technology that is becoming more popular among blockchain projects. One well-known project that implements VRF technology is Ontology. To really simplify this complicated function, let’s say there is the function F(x)=y (actually, a pseudo-random function). The x is the private key, and these inputs will result in a certain function y. However, you cannot find the pattern that you can work back to get the value of x. Therefore, you can use the public key to verify a certain output, but the randomness of this function does not allow anyone to have access to the input data. The pseudo-randomness of VRF prevents hackers from finding which nodes are to be “randomly” selected to verify a transaction, thus greatly improving security. A swift, yet safe consensus is the core to increase scalability, and VRF is a technology that can definitely provide this.

Ontology selects nodes in the network based on VRF

With VRF in mind, let’s have a look at MultiVAC’s sharding model based on VRF. A shard belongs to the subgroup of the entire network. For example, if the entire network has two shards, A and B, there is only one of the two nodes to be selected to process the transaction. In the MultiVAC network, a node is assigned based on VRF to process a transaction. The fundamental mechanism is to generate a random number in the main chain, then encrypt it with the private key of the node, and the end result is a random number that is assigned to a specific shard according to the probability model. A quick visualization of this process: The sorting hat in Harry Potter. The sorting hat (acts as VRF) is placed on a node and assigns these nodes to different transactions based on a probability model that nobody knows (for example, we do not on what circumstances the sorting hat assigns students to either Gryffindor, Hufflepuff, Ravenclaw, or Slytherin). In a hacker’s perspective, you want a certain student(=node) to go to Ravenclaw, but you do not know how the sorting hat works, so you have no way to break into the system. 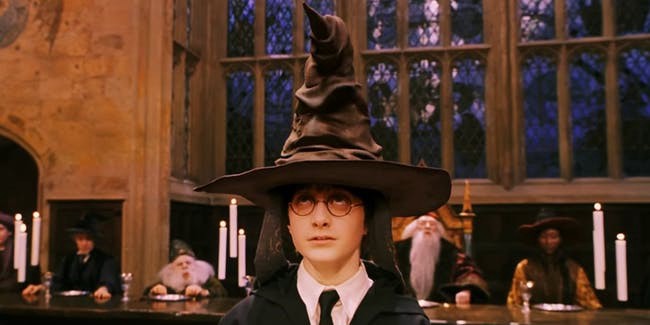 To this point nobody knows how the sorting hat assigns the houses, you only know which house in the end.

Likewise, Sharding’s biggest problem is that when an attacker wants to change a transaction or create double-spending, it can simply attack the particular shard instead of the entire network. This flaw is addressed by the UTXO model, which dynamically adjusts the shards. That is, keeping the user on the same shard and moving the minor randomly to another shard. This continuously dynamic adjustment of the shard makes the attempt to attack on shards the same as attacking the entire network.

MultiVAC Virtual Machine (MVM) provides a superior sandbox environment for running smart contracts. In the case of a public blockchain that provides unlimited scalability, designing a command set for a virtual machine is very important. To apply complex business logics in smart contracts, MultiVAC has created the MultiVAC Virtual Machine (MVM) that includes BISC (Blockchain Instruction Set Computer). The MVM, which is operational currently, supports the C programming language, and other languages such as Java and Go will be added as well. By integrating many languages there is compatibility with existing application programs and a flexible calculation model.

A quick visualization of BISC

Existing technologies, as seen in Ethereum and Zilliqa, typically require hundreds or even thousands of nodes. Because dApps are comprised of smart contracts on the public chain, the codes have to be run on all of the nodes, which greatly increases computing costs. To address this, MultiVAC has introduced its MVM consensus algorithm called Proof of Instruction Execution(PoIE). PoIE’s focus is on efficiently computing calculations for the execution of smart contracts. 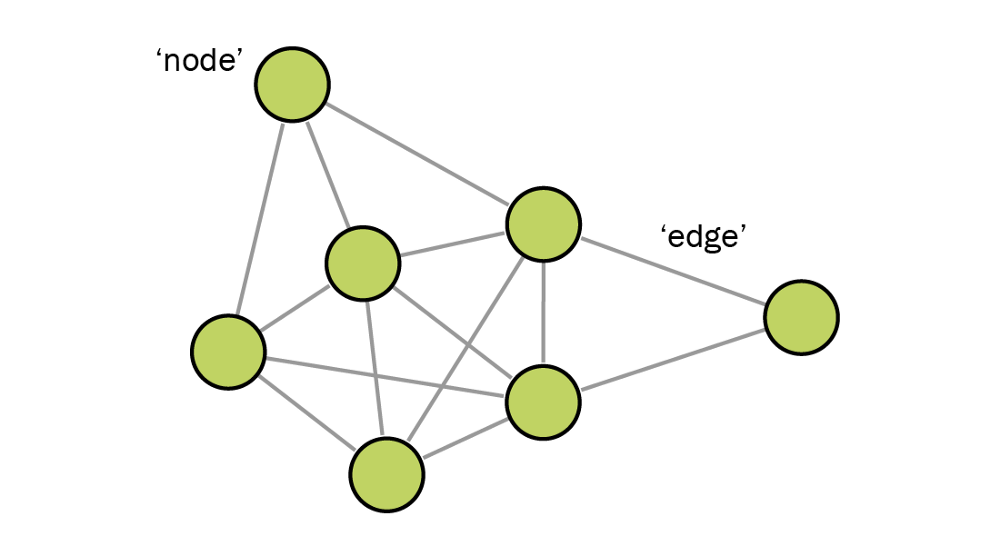 PoIE is a consensus mechanism that validates calculations in a manner similar to proof of replication. The PoIE algorithm is built directly into MVM and checks each instruction to be executed. Once the command sequence with enough gas (deposit) is completed and confirmed, the node issues the calculation results through the mechanism and receives the gas compensation. The basic logic of PoIE is that it is costly in terms of nodes that behave more maliciously than the interests of the network because all nodes running in the network provide a large amount of computational resources through hashing and random data processing.

MultiVAC in comparison to Zilliqa and QuarkChain

The very feature that separates MultiVAC is flexibility. Public blockchains at this moment have to find a balance between security, decentralization, and scalability. However, through the features mentioned above MultiVAC provides a platform flexible enough to adjust between these three features. Zilliqa and QuarkChain, in contrast, contain the entire transaction records in all the nodes. While the sharing of transaction data is important for security, MultiVAC differs in that it offers complete sharing technologies for transactions, computation, storage, and transport (the sharding mentioned above and the improved UTXO model). Normally when average TPS exceeds 1,000, the blockchain produces more than 10TB of capacity per year. This is something you cannot sustain with an ordinary PC. 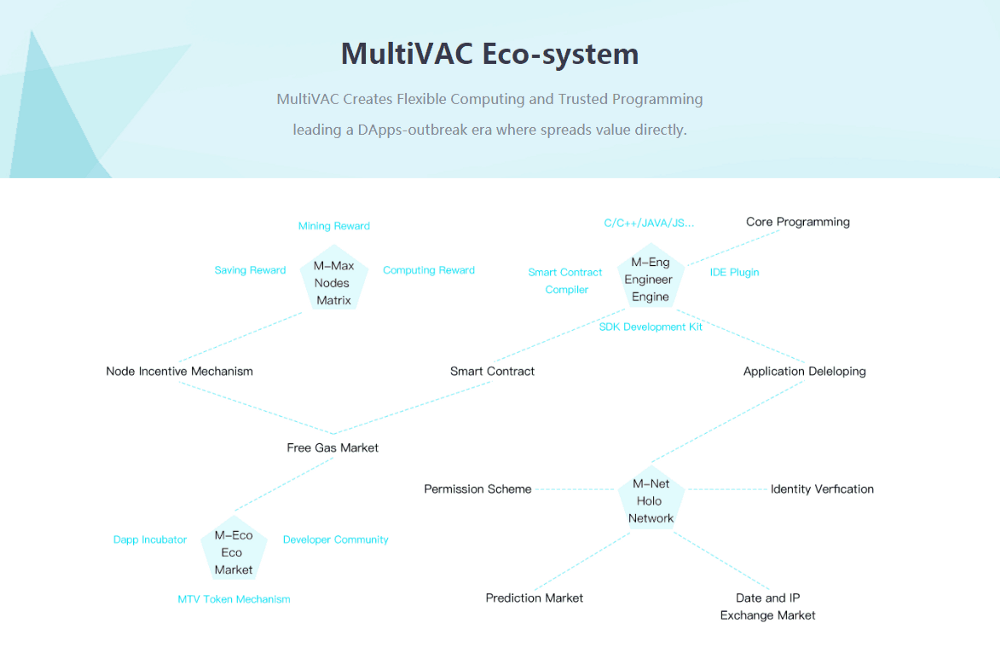 This is how you can imagine MultiVAC’s ecosystem, should it be integrated fully with traditional businesses

MultiVAC, in this context, allows dApp developers to choose security and transaction rate based on their needs. For example, if you need more security you choose a shard with more nods, and if you need more transaction speed you choose a less decentralized shard (aka fewer nodes). In a market where many projects choose a certain technology to be the “new era” and simply forgo the previous tech (which is in no way outdated), MultiVAC’s flexibility is definitely an advantage in a world where “customization” is a popular concept. One concern is that Zilliqa and Quarkchain have the first-mover’s advantage. Because MultiVAC’s testnet is to be launched 2018 Q4 (Zilliqa’s mainnet will be released before), there is some pressure that it needs to achieve a significant progress to make up for the late start. Regardless I have strong faith in the MultiVAC team, but it is something to be aware of as investors in a highly volatile market. 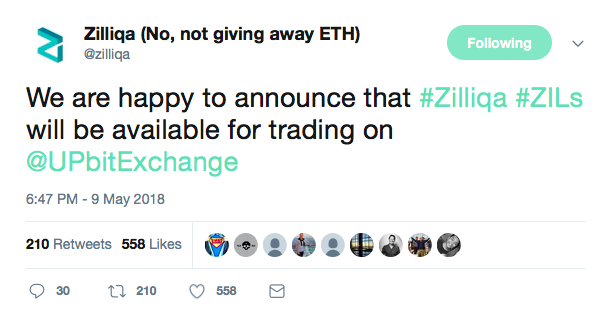 Is MultiVAC the next project to follow Zilliqa’s path?

Zilliqa and Quarkchain are some of the popular projects here in South Korea. MultiVAC is quite similar and different from those two, yet it is easy to group the three projects together. Seeing from the success of both Zilliqa and Quarkchain in Korea, I am really excited to see how MultiVAC will perform in the Korean market. Will it be the next Zilliqa or just another mediocre project? You are welcome to discuss in my group.