Home Highlights   Highlights on Suppoman Vs Ian Balina "WHAT DOES CRYPTO HOLD FOR 2019?"

Highlights on Suppoman Vs Ian Balina 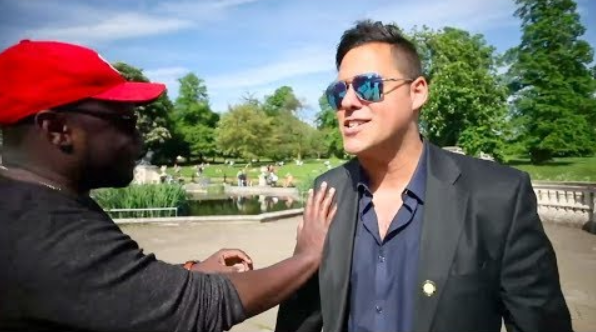 Ian: Hello everyone, Suppoman is with us today, welcome to the 100X show!

Suppoman: Glad to be here with you today.

Ian: Let's start with the most popular question. How is your Tesla?

Suppoman: It's more than a car, I really like it.

Balina: You definitely deserve it, congratulations. Your work is very useful for the community. The hard work of such public people like you and me people almost do not see and get only a polished result. I know how much effort it costs you, especially your show and the fact that you release it regularly. You release a video almost daily, I wanted to thank you for all your work. You inspire me to new videos.

Suppoman: Thank you, I really appreciate it.

Ian: As many already know, we were recently in London as part of the Crypto World Tour and we were lucky to see you there. You seem to be the mayor of this city, where a crypto community exists, perhaps the most numerous in the whole world. Our event there was huge, this is a developing ecosystem with people who love blockchain and cryptocurrency. So Suppoman, how do you see the cryptocurrency market today?

Suppoman: Now we see a picture of the opposite of what happened last year. Last year we enjoyed growth, and in this, we suffer from a fall. To some extent, I think that times have changed. There was a boom in the market last year when there were many people in the market focused on cryptocurrencies who liked to be part of the small community of those who believe in the future of technology. I think that since that moment Wall Street began to infiltrate the cryptocurrency market, the number of manipulations continues to increase.

Ian: I’m not particularly inspired by the arrival of Wall Street to the crypto market. Cryptocurrencies will not be used massively through Wall Street, although this may have some impact. It seems to me that the futures market, ETF and similar things are no doubt favorable for the market and will help in attracting new volumes, but this leads us to lose the spirit of the community. Now the control over the situation passes from the hands of ordinary citizens to the hands of institutional investors. We are already seeing a similar trend in the ICO field, where almost all sales rounds remain closed, the total number of projects themselves is declining, and legal requirements continue to evolve. I think that we are missing the very essence of cryptocurrency - decentralization, community, a power of people. So I do not like this situation, but I understand that the market must partially adapt and evolve. The current ICO model has shown its fragility, so the rhetoric about the "death of ICO" is now popular, I do not think that they have died, they simply go through the process of evolution. The market goes through another cycle. Do you think the ICO is dead?

Suppoman: I'm not sure that the ICO is dead. I would draw a parallel with the application industry, which boomed in the period from late 2008 to 2010. Then the popularity of mobile games such as Angry Birds and Temple Run took the world, the developers of any applications came to success. Over time, it became more and more difficult to conquer the audience, we had to really work, it was necessary to have a good company, an experienced team, support for venture capital from San Francisco. That is why the so-called unicorns, such as Instagram and Snapchat, were able to take the lead despite the late launch. Based on this logic, I believe that although 15 out of 20 ICOs last year showed good performance, in today's realities, you should be lucky to stumble upon 1 out of 20 ICOs that will be successful. However, it is this one ICO that will reach the level of Snapchat / Instagram, such projects should be special.

Ian: Yes, especially in my case, I haven’t invested in ICO for quite some time, for more than three months. My tactic is this: you should not invest just because you want to do this. To some extent, you need to respond to the situation on the market, as well as to the products represented on it. What are your goals for 2018-2019? Where do you think the blockchain sphere is heading? How are you going to develop your own channel? What content will you make?

Suppoman: In my opinion, 2018 was a period of adaptation. The rules of the game, as well as the players on the market have changed. In the end, how the market will continue to grow and grow will also change. My strategy will be to some extent helping people figure it out, guide them. The focus of my channel has shifted a lot. People say that I do a lot of advertising, as I often surveyed various cryptocurrencies and shared my own thoughts about why I like this or that project. Now, I do not think that such content will be insufficient demand. Today, people want to learn more about the potential impact of Bakkt, ETF and the like. I hope that the end of 2018 should lead us to the next bullish rally, after which we will need to adapt again to the new situation in 2019. I think the blockchain sphere will change a lot, attention will no longer be focused only on ICO. Existing companies have sufficient competencies to adapt to new conditions, I think that great emphasis will be placed on security assets (securities), as well as assets giving the right to own part of the company (equities).

Ian: I absolutely begin to notice the development of a trend for security coins, even at conferences. Now the dialogue is conducted mainly about security coins and stablecoins, many of them see the future of the market. I think that we may be in a year or two from the strong development of this trend, when large exchanges will be able to work with security coins, after the necessary legislative base has been created. That's when enough volumes and liquidity will appear on the market. Thus, with the advent of the new Binance, or Kucoin for security coins, the market will enter a new bull trend, similar to what it was in 2017. What is your top coin today? What projects do you like most about the new bull period? What do you think will grow the most?

Suppoman: I think that projects with big ambitions, which did not allow to realize a bear market, have the greatest potential, I think that these will be protocols. As for decentralized applications, I have invested in many of them. In my opinion, the bear market made it clear to people that despite the attractiveness of decentralized applications, the primacy still remains with the protocols.

Ian: Are you ready to name any specific projects that you like very much?

Suppoman: Based on current market offerings, I would point out Ontology, Zilliqa, Stellar and Cardano. I continue to keep quite a lot of Ethereum, but I believe that over time, DAG will create a serious competition for him.

Ian: I approve of your choice, although this is a rather conservative position for the capitalization of these projects are quite large. As for my preferences, this is PundiX, this project has greatly strengthened during the bear market with a monthly airdrop of 7%, the activity of the community in voting deserves all praise and can help this ICO fly to the moon. This project has the best performance of all that I have during a downturn in the market. They are also preparing to show their own blockchain phone, and this just stunned me, I saw how other companies would want to make their own decentralized applications for such a blockchain phone. I believe that PundiX has a huge potential, this coin takes the first place in my portfolio and I am tuned to it for a long-term period.

Suppoman: Initially, I did not enter into PundiX, and when I heard about airdrop to the coin holders, I decided to take a closer look at this project. When I saw how they built the relationship of cryptocurrency and the real world, I saw a real use for these coins. And now, when they have created their phone, and modern children growing up in the conditions of emerging digital currencies, they love new technology, Iphone and similar gadgets, and they will eventually want to have such blockchain phones and use applications on them. Thus, PundiX has become one of my good investments, I really like their plans.

Ian: One of the problems that I see in modern blockchain companies is the development and release of applications for centralized platforms, such as the App Store and Google Play, which are not very friendly to the cryptocurrency sphere, especially to the exchanges. Almost no stock exchange has its own application in these stores, perhaps with the exception of Coinbase, which most likely just have certain connections. Imagine if the blockchain phone was accepted by the blockchain community, and all the blockchain applications that previously could block centralized sites could go to it, this is what I see as a real breakdown of the established structure.

Ian: What would you like to say to our audience and the world at last?

Suppoman: I would like to say that the current market is transforming, Wall Street is preparing for another uptrend, the first stage was futures contracts, followed by purchases of exchanges, such as Goldman Sachs and Poloniex, now the price is low enough to fill the stores with large institutions, while ETFs are likely to be accepted soon. I think that as soon as the whole picture comes together, we will see an incredible growth in the market. That's what I hope for. To all HODLeram whom this bear market has exhausted, I want to say that I hope for a positive outcome.

Ian: Thank you for those wise words!