Kora Network provides a financial infrastructure for emerging markets and the global “unbanked” population. It will include:

Kora Network will use the DPoS (Delegated Proof of Stake) consensus algorithm to create blocks.

They have already released a mobile app for Android on Rinkeby testnet which provides some basic features to the Kora Network such as low cost financial services, enabling users to make fast and affordable money transfers to friends or members of their families anywhere in the world, and to make utility paymentsconveniently, right from their phones.

It is mentioned that they have already deployed their beta in Nigeria. But there is no proof of working beta, just an article and a video with happy African people with advertising leaflets in their hands. From the video that they have released on social media, it is hard to understand WHAT their BETA is ABOUT!

Update “As at the moment we have built infrastructures where our agents in training educate these farmers on how to manage their finances. Through our platform as we secure partnership deals with various multinational food processing companies”

There are twelve people on the core team and five advisors. We think that most of the team members do not have enough experience in blockchain sphere according to their Linkedin profiles.

It was mentioned on their website that their Chief Blockchain Architect, Oleh Ostroverkh, is an advisor to several blockchain projects. Unfortunately, there is no proof of it on Linkedin. And the admin from the Telegram group did not prove this information.

Kora Network has partnerships with several small local companies from South Africa in the financial sphere (infrastructure, loans and payments). It is doing well in the early stages of the project, but in the future, Kora will have to find more serious partnerships.

There are several competitors in this industry: Sentinel Chain ($10.1 M), Everex ($16 M), HERO token, and Debitum Network ($8 M). Almost all of them failed to reach their hardcaps. And now, their market capitalizations are less than the amount of money they gained from their ICOs.

The key features that make Kora Network different from its competitors:

KNT token is used to vote for confirmation of transactions and block creation, and for receiving fees for doing so in KNT tokens. They plan to have a system for bonding tokens to a block producer. They will publish a paper with all details about their reward-mechanism soon. 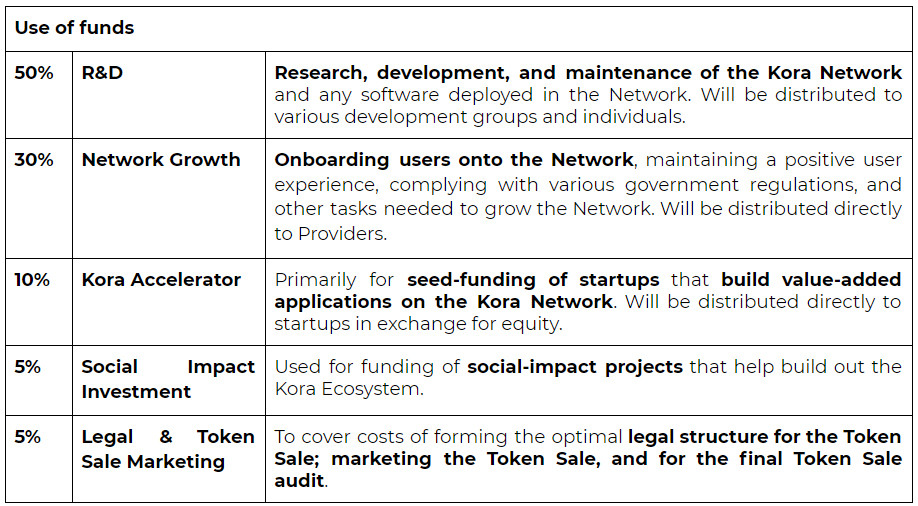 They have already received $4M in the private and pre-sale stages.

The Idea of the project is great, but it is too far from realization. The team lacks experience for such ambitious ideas and plans. We find the planned allocation of their funds ridiculous (30% for Onboarding users to the Network and 10% primarily for seed-funding startups that build value-added applications on the Kora Network). The tokenomics of the project will not bring large returns on investments in the short term. Even in the long term, Kora Network have to compete with other projects in this field.

It is also worth mentioning two redflags found during our research:

Research was prepared by